Whale and krill surveys are something of a recurring theme on RRS Discovery…  in fact, she’s something of a pioneer in this field – or at least her predecessors are.

Known as the “Discovery Investigations”, a series of scientific cruises and shore-based investigations into the biology of whales was initiated in 1923. The ship used for these research cruises in the Southern Ocean was a proven Antarctic stalwart – the first RRS Discovery, more famously used by Captain Scott in his 1901 expedition to Antarctica.

The original RRS Discovery, at her permanent home in Dundee, Scotland.

The research cruises collected data on oceanography, krill and whales; much as we have been doing on our trip. Once they reached South Georgia in February 1926, the team on board worked alongside the then-thriving whaling industry of Grytviken. Working with the whalers, they were able to collect biological data from the remains, as well as at-sea data on the distribution and numbers of whales. 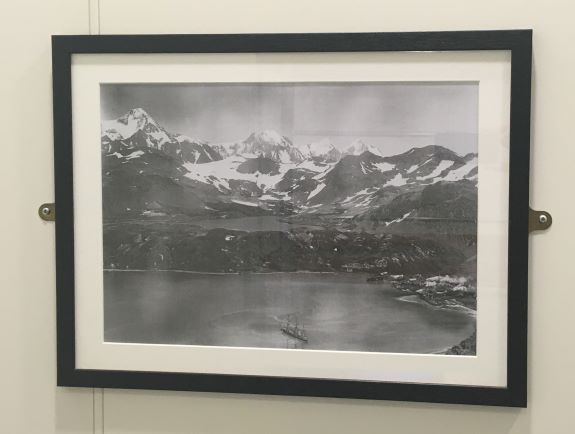 Reprint of a photo of the crew of the original RRS Discovery at anchor in Cumberland Bay, South Georgia. Photographed on the wall of the current RRS Discovery

The history of whaling is still very much in evidence at Grytviken today. The skeletons of both whales and whaling ships lie on the beaches, and the remnants of the processing machinery rust slowly against the hillside, long out of use. 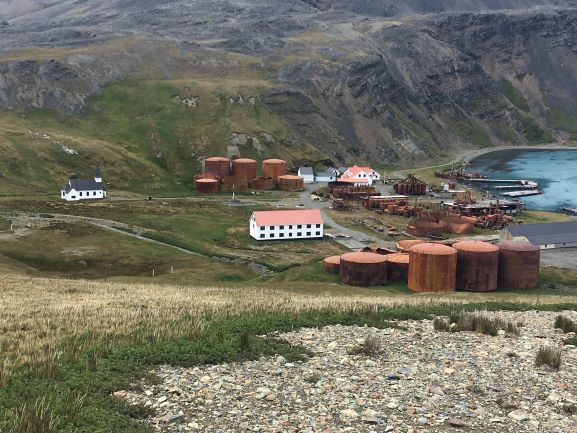 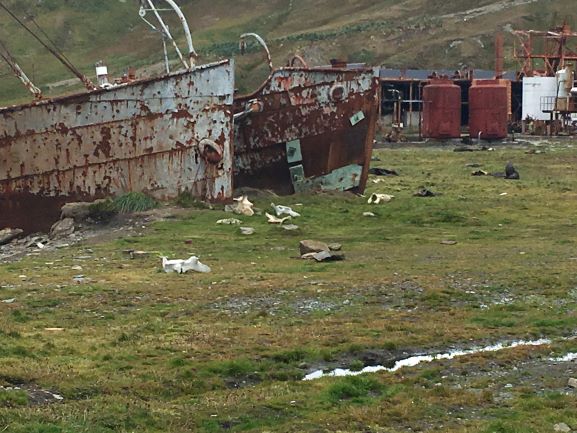 Whale vertebrae lie along the shore, alongside rusting whaling ships 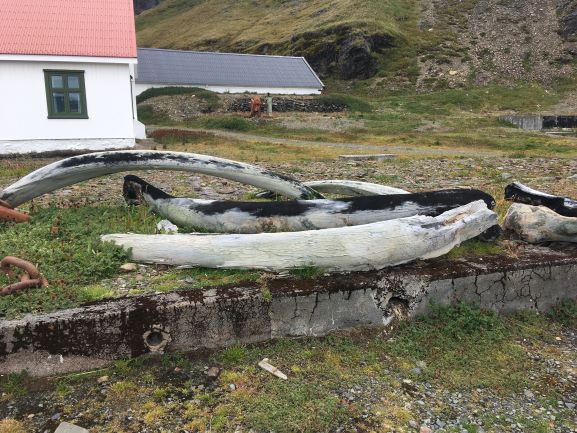 Whale jaw-bones lie outside the South Georgia museum, in what was once the whaling-station managers house

I am very pleased to report that (for the UK at least) current whale biology is carried out in a non-lethal and much less invasive manner; the sheer scale of the infrastructure here and the debris left behind goes some way to providing an idea of what this destructive industry must have been like at it’s peak.

But anyway, back to the Investigations…

RRS Discovery II became involved in the project in 1929, and her Maiden Voyage was a hydrographic survey of the South Sandwich Islands. She remained involved to the end, her last survey was in 1951. 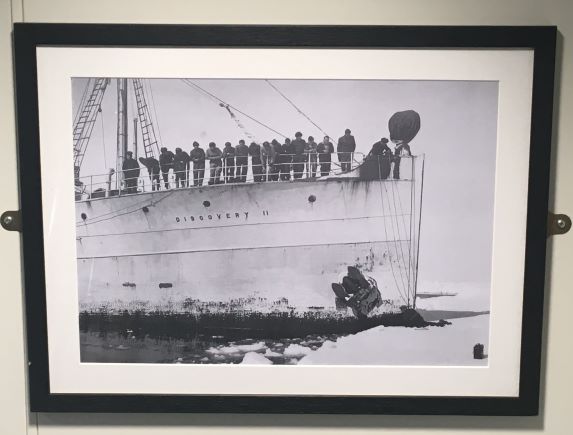 Reprint of a photo of the crew of the Discovery II, photographed on the wall of the current RRS Discovery

The Discovery Investigations continued for many years, with the final survey in 1951 and the final report only being published in 1980. There are more than 37 volumes of reports documenting everything from the biology of elephant seals and fin whales to that of nematode worms; geology and hydrology; mapping and bathymetry.

There can be little doubt that the work of the Discovery Investigations made an enormous contribution to our knowledge and understanding of the whales, seals, penguins, pelagic seabirds and krill that make up this fascinating ecosystem, as well as the geology and oceanography of this previously unstudied area.  It’s fascinating to be part of a cruise continuing this line of investigation on the fourth RRS Discovery, and to see the little nods to her heritage – like the photos on the wall and the whale logo on the gate on the way up to the Navigation bridge which takes the form of the old Discovery Investigations logo.

That having been said, I’m very pleased the days of lethal whale research are largely behind us. See other blog posts for further information on what we are up to on this survey, but rest assured, our current whale work is completely non-invasive – merely counting animals and taking photographs. 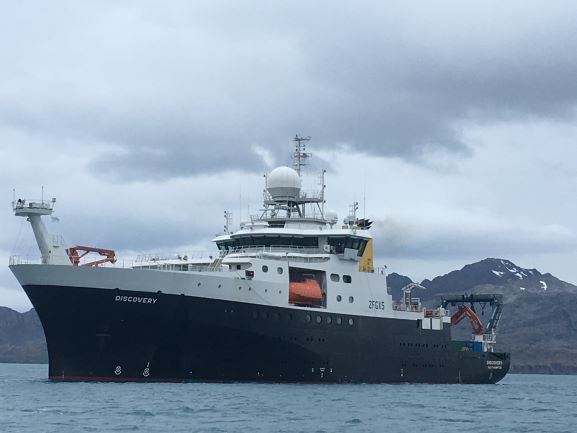 I must confess this is something I knew nothing about prior to this cruise – so the bulk of the information has come courtesy of wikipedia. If you’d like to find out some more – I recommend having a look at the following:

For those of you who aren’t currently on a ship with limited internet access, I expect there are lots of other sources too! 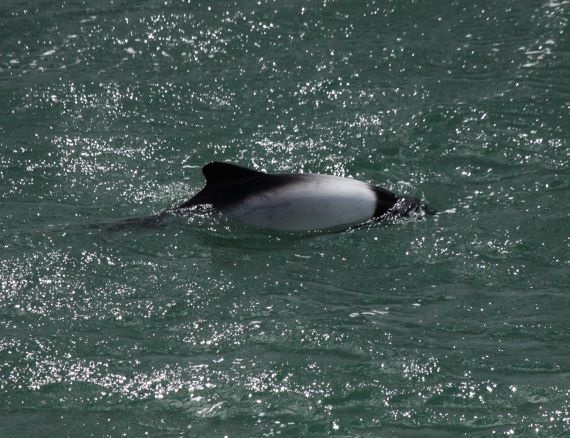 Commerson’s dolphins are mainly found in very shallow, coastal waters around Argentina, the Falkland Islands and the Straits of Magellan. Since this is the first time I’ve been this far South myself, I’ve been very much looking forward to seeing them.

I was not disappointed!

Their colour pattern is striking – and the white patches make them really easy to see, even through the greenish coastal waters.  As we wait on the ship making final preparations are made to leave, these wonderful little dolphins are regular visitors.  To readers back in Scotland who are more familiar with the robust bottlenose dolphins we have around the East Coast, these will seem very tiny indeed – they average only about 150cm long.

They tend to live in small groups – we are seeing them most commonly in pairs and threes – and feed on a variety of different small fish species. They’re a generalist predator.

I’m slightly wishing I had a hydrophone on this trip as it would be great to get a recording of them to hear how they sound. 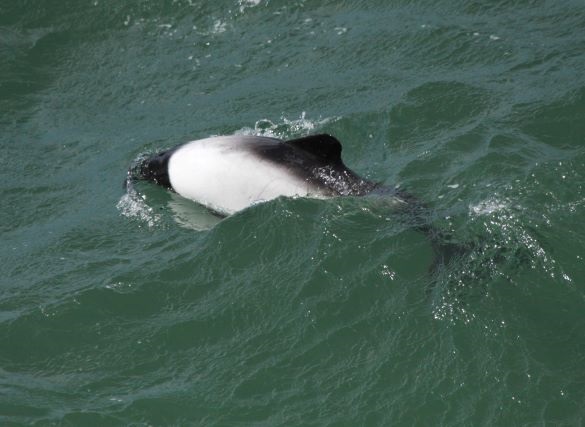